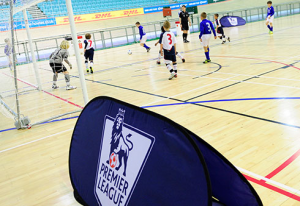 The school hall echoes with the sound of the coach’s directions and the squeak of trainers on the hard court floor. “Manipulate the ball with sole of your foot,” he suggests. “Keep the ball in this area here.”

The boys going through their skill drills are Everton’s Under-11s. Some of the best youngsters from Merseyside and the surrounding area are gathered at Wade Deacon High School, in Widnes, where they are warming up for their weekly futsal session by their coach Tom Kearney, who is preparing them for the Premier League Under-11 National Futsal Finals, which get under way on Thursday. “Take care with your pass, but really take care with your touch,” urges the 32-year-old. “Don’t stand still.”

What is the EPPP?
The Elite Player Performance Plan is a Premier League initiative that seeks to create more and better homegrown players who are properly equipped to succeed at the highest level. Clubs have invested £340m over the first four years into addressing the fundamentals of player development: the quality of coaching, acccess to coaching contact time and the provision of support facilities and staffing to enable the highest possible level of player development

When it comes to the footballing education of their youngsters, standing still is the last thing the Everton Academy are doing. Indeed, they are leaving no stone unturned in their pursuit to develop a more creative, intelligent brand of footballer as they follow the Performance Pathway set out in the Premier League’s Elite Player Performance Plan (EPPP).

The EPPP aims to tailor the best coaching to suit the changing needs of young players at various stages of their development, and Everton’s approach towards developing the skills of boys at the Foundation Stage (Under-9s to Under-11s) has futsal at its heart.

Futsal was first introduced at Everton in 2012, following a conversation between their Academy Head, Alan Irvine, and Andy Roxburgh, the former Scotland manager and initiator of UEFA’s Grassroots Charter.

“The key thing he told me was, most of the top Spanish and Brazilian players have grown up playing football and I thought, ‘well, why not look into it?’,” says Irvine, who agreed to trial it for the youngest age-groups as bi-monthly sessions in conjunction with the academy’s Schools Release Programme. The exercise proved such a worthwhile experience that Irvine decided to adopt it on a more regular basis.

“At our academy we have a philosophy where we want to dominate possession, control the tempo of games, and be able to play in a controlled and systematic way,” adds Irvine. “We want to develop players who are tactically flexible and technically competent, so a lot of this ties in very nicely as far as futsal is concerned.

“We’re quite convinced that it adds to our programme. The fact is we don’t play a five v five game; we’re trying to develop players to play eleven-a-side. It’s simply a case of trying to take the things that are transferable from futsal and using them to benefit our players.”

At first glance, futsal appears to be little different from five-a-side football. There is the same number of players on each side, the goals are small and the action swings from end to end. But there the similarities end.

“We want to develop players who are tactically flexible and technically competent, so a lot of this ties in very nicely as far as futsal is concerned”
Alan Irvine

“It’s a heavier ball, which gives less bounce, so it encourages a lot more ball control and manipulation,” explains Kearney. “You have to find other ways to get out of situations rather than kicking it long because it’s harder to kick. It forces a bit more skill and combination play, and the need to use different parts of the foot for receiving it, such as manipulation with the sole: this encourages more individual one-v-one situations.

“Unlike astroturf, the hardcourt floor is a skiddy surface, the ball really zips around and sometimes you don’t have the time to receive it on your back foot as we’d all like to, so it forces players to receive the ball in tight areas with the sole, quicken the reflexes and move the ball quite quickly.”

Whereas in five-a-side­ it is possible to get out of difficult situations by playing one-twos of the side-walls, futsal offers no such luxury; there are no walls in futsal.”The rules about not hitting off a wall increase the onus on accuracy and weight of passing, which side to pass to,” continues Kearney. “So if somebody is marked one v one you can still pass to them, but it’s got to be really precise to the opposite foot, so they’re not receiving it next to the defender. Not playing off the walls means there has got to be an emphasis on the accuracy of and the care taken with every pass.”

Futsal is also an inclusive game. While some forms of football might leave players in certain positions isolated for long periods, the fast-moving nature of the game is such that no-one is excluded for long, meaning the interest of the participants is less likely to wane.

“You’re never more than two or three passes away from the action,” explains Marc Canham, Club Support Manager for the Premier League, who hopes more Academies choose to adopt Everton’s approach to futsal by embedding it in their Games Programme. “Because the transition is so fast between attack and defence the amount of attacking and defending scenarios they are involved in is much greater than in a normal game.

“It also allows the kids to enjoy themselves even though they are in an elite environment, and that is so important because they will never continue their development as a player if they don’t enjoy it.”

Whilst they enjoy the all-action nature of the sport the players pick up skills that will become indispensable to them later on in their footballing development. It is, as the Foundation Stage would suggest, helping to lay a solid base for their footballing future.

“The players have to think so quickly and make decisions at speed, compared to a normal game,” says Canham, who won over 40 caps for England at futsal. “And if you think about where we want to get to and the end point of playing in the Premier League, which is probably one of the fastest, most robust leagues in the world, having to make decisions so quickly lends itself to putting this game into a programme. After all, that is what they’re going to have to be able to do when they get older.”

As a key part of its Winter Games Programme, a scheme which sees a variety of indoor activities provided for the clubs and their academies, the Premier League has been putting on various futsal events over the last three years. This week the Premier League National Futsal finals takes place at the International Arena in Leeds, and both Irvine and Kearney will be keeping a keen eye on how Everton get on in the Under-11s category this Thursday and Friday.

“The U9s, U10s and U11s have been involved in a couple of festivals up to now, and the U11s played in a qualifier before Christmas and qualified for a national tournament in Leeds,” reveals Kearney. “It is another stepping stone which will give the players a taste of a slightly different environment. There will be spectators watching, there will be a crowd cheering, and a bit more pressure to beat different teams, and in the long run that can only be great for the lads.”

In part 2, we discover how a trip to Barcelona FC by Everton’s Academy director Alan Irvine and his coaching staff strengthened their commitment to embedding futsal in their Games Programme. Click here to read Part 2.