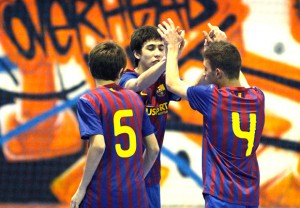 Everton’s Director of Academy Alan Irvine was so impressed by a trip to watch Barcelona’s futsal players that he has expanded the five-a-side sport to all junior age-groups from the Under-13s down. “Played at the highest level futsal is game of constant passing, receiving, movement and counter-attacking,” he told Premierleague.com. “There are many benefits that I can see.”

Irvine first trialled futsal as a bi-monthly extra-curricular activity for the youngest age groups at his academy in 2012 and, encouraged by the progress made by his young charges decided at the end of last season to roll it out for players in the three year groups of the Foundation Stage (Under-9s to Under-11s) of the Premier League’s Performance Pathway, as set out in the Elite Player Performance Plan.

What is the EPPP?
The Elite Player Performance Plan is a Premier League initiative that seeks to create more and better homegrown players who are properly equipped to succeed at the highest level. Clubs have invested £340m over the first four years into addressing the fundamentals of player development: the quality of coaching, acccess to coaching contact time and the provision of support facilities and staffing to enable the highest possible level of player development

Their open-minded approach has helped Everton’s cause as they seek to impose an expansive footballing philosophy that filters all the way down from Roberto Martinez’s first-team to the Foundation stage. When the Spaniard joined the Goodison club last summer Irvine was keen to get his thoughts on the burgeoning sport.

“I spoke to Roberto and asked him about futsal and what his experiences were,” said Irvine. “Not only was he supportive of it but he thought it a good idea for us to experience a mature futsal set-up and for us to learn more. So he put me in touch with Marc Carmona, the manager of Barcelona’s futsal side, and Marc was happy to help. We took a couple of youth-team coaches and went out to watch their boys in action.

“Barcelona looked after us brilliantly and we came back absolutely convinced that there were skills that were transferable to the eleven-a-side game. We decided that we would run the programme for some of the older ages as well. So now our Under-12s and Under-13s also play futsal.”

Irvine confesses that his appreciation of the sport was limited when he left for Spain, but by the time his four-day recce mission was over, the former Everton winger was much the wiser for his visit. “What I saw was how players developed from the very youngest ages, where there were certain techniques and skills that they had to develop to the game played at the highest level, which is a game that is really about passing and movement,” he said.

“The movement is terrific, as is the ability to pass and receive the ball, and at the younger ages there are more one v one situations which is something that we look for. Played at the highest level futsal is game of constant passing, receiving, movement and counter-attacking. So there are many benefits that I can see.”

Under-11s coach Tom Kearney also found the visit to Catalonia an eye-opening experience. “One of the main things that struck me about watching the kids at Barcelona was the speed of the transitions,” said Kearney. “It was very fast. The players didn’t have a lot of time to think and the reaction times from losing possession to winning it back were fantastic.

“That’s what jumped out at me: when you think that to make the grade in the Premier League you need to have that mentality of reacting quickly and winning the ball back as soon as possible. Then, when you have it, keeping possession of the ball is paramount because you don’t want to be chasing it all the time. Futsal encourages those facets of the game.”

The preconception that the Barcelona boys would insist on keeping the ball on the floor was also flawed. The absence of a head-height rule encourages all manner of inventive passing, and no-one shied away from a high ball.

“We found the ball was in the air a lot more than we expected,” he said. “That made for different types of aerial passes, which in turn forced different types of ball control. They did not necessarily have to beat a man with a dribble, they looked for other ways to get through such as the scooped ball over someone’s head and a first-time finish.

“In one-v-one situations, there was a lot more combination play and a lot of creativity. We thought, ‘If we can give those little bits to the player to help improve his awareness and creativity, then great.’ We found there were a lot of benefits gleaned from the trip, and we’ve seen those benefits reflected in the lads playing it at the moment.”

Irvine does not claim that futsal is the magic ingredient for creating an army of exceptional homegrown players but believes it to be an important factor to complement the other elements of the academy’s coaching programme for the younger age groups.

“We’re certainly in favour of it and we’re working and running with it just now as a part of our curriculum for our age groups from Under-13s down,” he says. “We’re not saying that this is it and everything’s going to be perfect from now on and why didn’t we do it before. The fact is we have to do a lot of other things as well. But the trip to Barcelona convinced me that there were more things that were transferable than what I initially thought.”

“If you come to some of the Premier League Futsal Festivals, the kids are experimenting and doing things they wouldn’t normally do on an astroturf or a normal pitch”
Marc Canham

“We need to understand that when we talk about futsal it’s about the transfer of the acquired skills to football, because we are using it as a tool to try and develop football players, not futsal players,” says Canham. “If you stand in the hall or watch some games or come to some of the Premier League Futsal Festivals, the kids are doing stuff they wouldn’t do on a normal astroturf or on a pitch on a Sunday.

“They are experimenting and trying things because the speed of the ball on the ground is different, they’re experimenting and doing things they wouldn’t normally do. And if they’re practising that constantly it will become second nature to them, so when they do go back on to the pitch it won’t matter to them whether they are on grass, astro or hard court, because the skills they have learned will become ingrained.”

Canham is also quick to dispel the notion that futsal is in any way expensive for clubs to stage or complicated to coach, citing Everton’s weekly use of Wade Deacon, which is 15 minutes from the club’s Finch Farm training ground and is equipped with a hardcourt floor, as the perfect case in point.

“In terms of requiring the right the facilities, Everton are a great example of a club who have got around that,” he said. “Every club have the opportunity to put futsal in their programme and work with a school or a facility like Wade Deacon to put it in place. As for coaching, there does not need to be a lot of input from the coaches in terms of interventions. It’s a game that you set up and just let the kids play.”

Having seen his kids play futsal every Tuesday night Kearney is already seeing progress in his charges even after just six months. “Looking at the young lads now, playing futsal, they are getting so many touches of the ball, and lots of decisions to make and off the ball,” he said. “It’s a fast game – you don’t get much time to think, and at Everton Football club we want all our players to be independent decision-makers. Futsal is giving the lads a lot of opportunities to do that.”