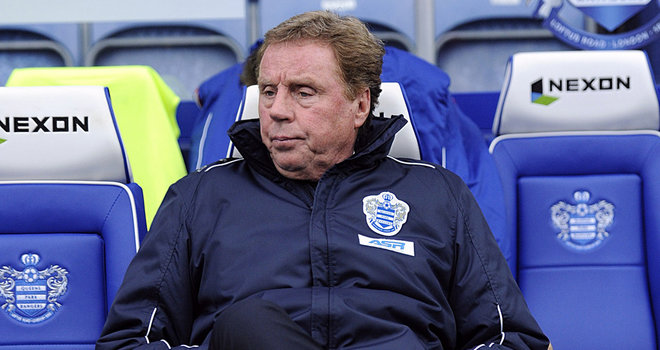 A shambolic showing from the U21 side at this summer’s European Championship – which saw them suffer three straight defeats to crash out at the group stage – has placed the spotlight firmly on the national game.

The struggles endured by Stuart Pearce’s Young Lions have come on the back of a number of disjointed and uninspiring showings from the senior side.

The general consensus is that England have slipped well behind their rivals when it comes to ball retention and creativity in the final third, and Redknapp believes it is imperative that those issues are addressed if standards and reputations are to be rescued.

“We do not know how to play football. We just boot the ball up the pitch and it gets us nowhere.”
Harry Redknapp

Redknapp, who was a contender to land the national post prior to Roy Hodgson’s appointment, wrote in The Sun: “I am passionate about the England team at all levels and get terribly disappointed when I see us perform so abjectly against other countries when we have such great individuals.

“But the overriding problem we all face is that English football must change. And it has to come from the very top of the game. That means manager Roy Hodgson getting involved with coaches at every level working in the same direction.

“We do not know how to play football. We just boot the ball up the pitch and it gets us nowhere.

“We don’t have the kids coached the same way – the right way – from a young age. As a result we have a senior team that is greatly underachieving.

“Man for man there wasn’t a country on Earth that could match that on paper. But together they never produced because we just hoofed the ball forwards into channels and hoped for the best.

“In international football you cannot just hit and hope because you give the ball away. It’s all about possession, retaining the ball, controlling the game. We need coaches who believe in that ideal.”

My own observation, Harry is right, its why we play FUTSAL!