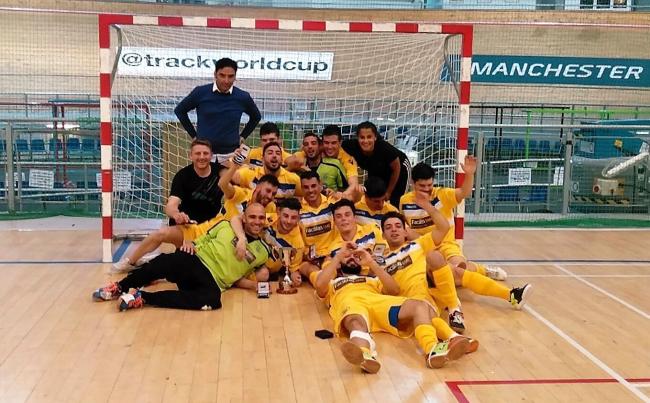 Lions claimed the title after a 6-4 victory over FA Futsal Super League South rivals Genesis in the final at the National Cycling Center in Manchester, having defeated Enfield 6-2 in the semi-final.

It marks a first national title and Guillen believes it is richly deserved.

“We’ve worked very hard to achieve this,” he said.

“We train four times a week and the whole season we have prepared so we can go into the finals in good fitness.

“A lot of teams came into the competition. Getting into the final was a big achievement, so to win it was fantastic.

“It was a long day and winning it wasn’t easy, but everyone is really happy now.”

But the day nearly turned into a disaster after Lions’ opening match was delayed due to heavy traffic.

Guillen said: “We left at 8am, but after getting stuck on the M6 we were worried we wouldn’t make it.

“When we got there we had just half an hour to warm up and I think we started slowly because of this.”

Four second-half goals were enough to secure Lions’ passage into the final, setting up a clash with Genesis, from Newham, London, who they had defeated twice already this season.

Lions twice fell behind in the early stages, before storming back to win 6-4 thanks to a sensational four goals from Sergio Garcia-Cano, as well as efforts from Liam Palfreeman and Dani Pena.

Guillen said: “Genesis like to sit at the back and wait for any mistakes before hitting on the counter attack and they did it really well at the start of the game.

“They took the lead twice, but we were able to keep up with them until half-time.

“In the second half the boys really came through and played their best game and when we scored the fourth we knew we would be able to win it.”

Lions will have the chance to claim a league and cup double as they travel to St George’s Park for the grand finals of the FA National Futsal League on June 12.