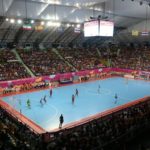 Costa Rica, Croatia, Iran, Japan, Kazakhstan, Lithuania, New Zealand and United Arab Emirates have all confirmed that they will be bidding to stage the FIFA Futsal World Cup in four years’ time.

The fact that this octet from four separate FIFA confederations (AFC, CONCACAF, OFC and UEFA) have announced their intentions is truly significant.  The number represents the most bidders in a Futsal World Cup bidding process and one of the highest ever for a FIFA competition.

Also none of the eight countries listed have ever hosted the event before, so the tournament will be heading to a new location.

The respective Member Associations will now be working on their bids and their bid books and have to submit them to FIFA by Friday 5 August. The submissions will be evaluated and a host appointed in December.

The 2020 tournament will be the ninth edition of futsal’s premier competition, which has so far been played on four of the six confederations, since beginning life in the Netherlands back in 1989. A record 122 Member Associations competed for a place at Colombia 2016 where, from 10 September to 1 October, 24 elite teams from all over the world will attempt to become the next Futsal world champion.