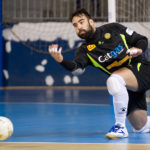 MIDDLESBROUGH, 29th June 2016 – For the second year Boro will host the only International Futsal Camp held from 25th-29th JULY at Middlesbrough Sports Village and this year, you will train with TWO professional futsal players from Spain.

Middlesbrough Futsal Club has joined forces with the “Liga Nacional de Futbol Sala” or LNFS, side, Catgas Santa Coloma, where club chairman Damon Shaw is coaching to bring over two of their players.

You can sign up for the week-long training course for just £65, with sessions from 10-3pm. This camp is for children aged 9-16 and will be split into two groups.

There are also six boys from Spain attending who are looking forward to getting to know Teesside and Middlesbrough Futsal Club. The club are looking for a couple of families who are able to host a Spanish boy during the camp. Families will receive a contribution and free attendance at the camp.

To register with 10% off for early bookers until 5th July, visit www.borofutsal.com. For more information, call Damon Shaw on 07807146319 or emaildamon@borofutsal.co.uk.