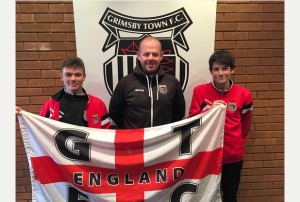 Grimsby Town futsal players Liam Hulse and Jack Boswell, right, who have been called up to represent the North of England, pictured with coach Mark Westerby, center.

TWO members of Grimsby Town’s futsal team will represent the north of England in a national contest on Sunday.

Jack Boswell and Liam Hulse are on the Mariners’ Sport and Education Trust programme – which combines studying for a recognised educational qualification with the chance to represent the club at futsal.

The two 16-year-olds will take on a South of England side at St George’s Park national football centre in Burton.

Coach Mark Westerby said: “This is a fantastic opportunity for the players to experience playing futsal at a top venue, with other top players.
“It gives them a chance of really progressing. The England manager and his staff will be there watching and hoping to take players from this into the England development squad, which sits one below the England team.

“Myself and everyone else at the club are very proud of them for reaching this stage.

“This not only reflects well on the players, but also on the club’s futsal scholarship.

“The two boys have worked extremely hard and deserve this opportunity to show what they can do.”

As the small-sided version of the sport continues to grow, Town’s scholarship scheme has enjoyed success.

Seven of their players have attended the FA Futsal Centre of Excellence for the North East.

Since September, the players have been attending regular camps in Leeds, training with other 16-19 year-olds selected for the programme.

The camp has proven vital for the players’ development, giving them some excellent opportunities to show off their ability.

They have twice played in front of England manager Peter Sturgess, who was very impressed with the players at the camp.

All four northern regions joined together for a tournament where the North East squad, which included the young Mariners, won all three games.

From this, the FA has now selected ten players to represent the North of England, while the south of England have replicated the same programme.