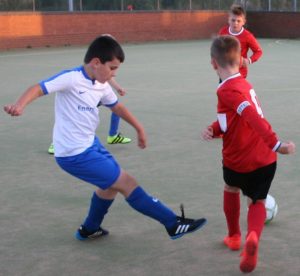 Both teams did their coaches proud. The ball spend 90% of game on floor, the only punt forward was when a player was cornered in a tight defence position that favoured the opposition. Futsal World Champions do same in same situation.
Futsal players train to make positions that allow a game switching diagonal pass; these lads picked a dozen out in match – exceptional.
Pleasure to be second referee to Mark who controlled game brilliantly.
Well done both teams, can’t wait to see you play again.
Now my little nitpick, not specifically this game, why when players are obviously being so well coached do parents feel free to coach their player or the team from opposite side of pitch. If you see something that you can add, be patient and have a quiet word with coach at appropriate moment, which could be next day when everyone has chilled and has had thinking time. I often repeat this, but best advice I ever heard was from an England sports psychologist, ‘never use a player name during game,’ well done Colts’ – ‘great goal United’, share the praise to the team not the player.’