The first half was all Peoples Bar, they bossed the ball and the teams player rotations off the ball were top class, worthy of a National League team. By the break PB had opened up a healthy 4-2 lead and looked in control of the game. 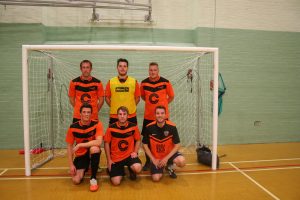 Those off us that have watched lots of futsal know that a tactical change can dramatically alter a match pathway. This game was no exception; Franklin went into a long half time discussion, came out and scored an early goal (4-3), that one goal with 18 minutes left to play altered the game physiologically for both teams. Franklin new they had time left – the goal had given them the confidence to drive on, which they did.

Peoples Bar responded and had chances, squandered chances; three times Franklin hit them on counter with three of PB team stranded at wrong end of court. Franklin opened a two goal lead that no one saw coming at half time. Worrying for PB is they never responded to Franklin’s change to a full on pressing game, playing out from back is highly commendable but there are times when the ball needs to go long as a surprise element.

Yet another game of great skill and technique, a pleasure to watch.