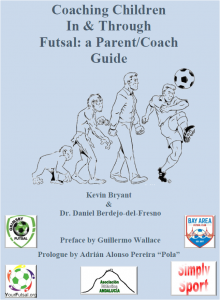 For me more enjoyable. Not so when I go watch 11 vs. 11 football, which I cannot watch as a fan anymore, either at the local park or on television. Who else but a coach would watch Liverpool vs. Newcastle, and count that Liverpool made fifteen first half back passes to their keeper, yes fifteen. This in a game they dominated. Is a rule change needed? Viewing figures would suggest yes.

Monday night I refereed three great games but widely different age groups. The first game was an u9s friendly which I could not help notice how far these lads have to travel to reach the level of CBM under 19s in the final game. In the u9s game I found myself concentrating on one player who struggled badly. He had no conception of space and movement. Was this because in mini soccer players have set positions? He may have been asked to play up front in mini soccer, which is a million miles away from playing up front at futsal. In futsal the forward pivot (football centre forward) may end up as defensive pivot (centre half) during same attacking move. Players rotate positions during a futsal phase of play. They don’t at football.

As a parent I would be asking questions of the coaches, just what they might be doing to help my son rectify his mistakes from that one game. This can be done politely. The development of your player is paramount at this age.

The last two games were older age group matches. CBM vs. Tetney was simply brilliant.  Teenagers with above average technique and super fit. Want to see how futsal should be played; pop down to a CBM game, you will not be disappointed. Self taught and brilliant. Watching them as a coach is far more difficult, the advice you might offer stretches your ability as a coach. Tetney less so, till they get a sixth player in team they will continue to be a great first half team. Futsal is like doing shuttle runs; even the best have a limit. An extra player or two means you can do more high energy sprints.

Lions vs. Clee Mariners was an under nineteen battle that ran out in Lions favour in latter stages. As a coach I would have been banging my head against a wall. Bad defending at corners. Four defenders defend a corner, not three, four! Every player should have his back side to goal. If your goal keeper cannot read the number on your shirt you’re facing the wrong way. Defending is about organisation, defending is a skill achieved without the ball. Mariner hard work was undone by players defensive positioning.  Coaches have to observe and remedy. Repeating the same mistakes will only give the same result.

Please have a read of a book I have co written on this subject. Coaching children in and through futsal.