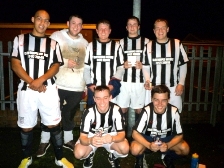 Valiant are now confirmed winners of Tuesday League XX1. Seems weeks since they ‘appeared to be winners’ but with Trawl having games in hand they could in theory have overtaken Val’. Unlikely with such an inferior goal against record but as the saying goes ‘It’s never over until the fat lady sings.’ Well she has sung!

The Monday Intermediate League has new Champions Clee Town 5’s – points in hand on their nearest rivals the team has been in devastating form past few weeks, winning with style and panache.

Talking of style Titans (11/12 league) was held to a 4-4 draw by Bayern Neverlusen just when it looked as though Titans was unbeatable. For the second time Bayern accepted two games on same night and for the second time failed to get point’s second time out. Loss of energy, concentration because of time break, whatever it is best kept to one game Bayern. Referee report was that Bayern second game was best game he had refereed, if not best game of futsal he had seen, high praise. Game was marred by red card for player off each side at end of game. Cost a lot less to shake hands lads.

Manchester’s first team will this weekend represent England at the Street Football Grand Finals in Vietnam. Grimsby has to get a team back in National League as these are the opportunities we are missing out on.  The game is huge across Asia, when Paul Goodhand represented England the KL5’s tournament had a million pound prize to winning team, and that was 2004.  The FA is aware we want to be back in League, next stage is getting some friendly games against League opposition to back up our entry credentials.

Year 9/10 League welcomed newcomers Keelby who took to big hits but how refreshing they were straight away asking who they were playing next week.

Year 4/5 League is great fun to watch, the improvement these youngsters make week on week is amazing. The standard of each team just gets better each week as the lads learn from their errors. Just like ‘street soccer’ of old.