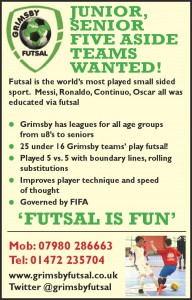 Tranmere Rovers will shortly be officially opening a brand new state-of-the-art futsal hub at Prenton Park – and they have two new members of staff to oversee it.

Steve Brand and Ray McLaughlin have 35 years’ experience of officiating futsal and football between them and they will be educating newcomers on the rules and how to play the fastest-growing sport in the world.

Steve is a locally-based referee who progressed up to officiate in the Premier League. He has a connection with Tranmere as he was the reserve official for the Worthington Cup Final at Wembley in 2000 in which Rovers were beaten 2-1 by Leicester City, making an appearances as the fourth official following an injury to the on-field officials.

Ray is on the FA National List of futsal referees and has refereed with his son, who is also a fully qualified official. He has refereed in the FA Premier Academy and has taken charge of the Football League Trust Futsal finals.

The new facility is the only specialist futsal hub in Wirral with floor and lighting which meets the FA and FIFA required standard.

The hub, which will also be used by the Tranmere Rovers teams from their Academy through to the first team, will be open five nights a week from Monday to Friday 6-10pm.

While the official opening of the Tranmere Rovers Futsal Hub is not until September 27, there are taster sessions taking place from this week, while the leagues will start the week commencing Monday, September 28.

The range of teams start from under 8s to under 16s through to adults (both men and women) as well as veterans teams.

For more information or to book a taster session, contact Ronnie Johnson via email to trfcfutsal@tranmererovers.co.uk