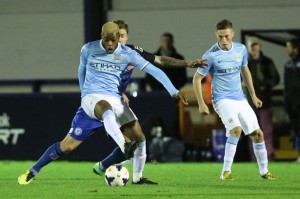 Adam Drury is not afraid to leave Manchester City for more first team opportunities.
The 20-year-old has impressed under the City EDS coach and is currently on loan at Scottish side St. Mirren.
Drury moved on a temporary deal to Burton Albion in the first part of 2013, and will be with the Scottish Premiership side for the whole of the 2014/15 season.
It is a move that Drury feels is necessary.
“You reach a certain age where you have to get out on loan,” he told the Daily Record .
“I’m 20 now and I need to experience first-team football. Hopefully this time at St Mirren will improve me as a player.
“I had offers from other leagues in England. But my agent and the coaches told me St Mirren would be the best move.
“Patrick Vieira and Simon Davies advised me to come and said it would suit me. Patrick felt with the type of football  St Mirren play I’d fit in well here. And I didn’t want a club where I wouldn’t fit in and wouldn’t play.
“Patrick’s been up here. He feels the philosophy suits Man City players and we already have Ellis here – and that helped too.”
Drury has been at City since he was 12, but is aware of how hard it will be to break into the first team.
“I want first-team football and it might reach the stage where I have to move on,” he said.
“If that is next year or the year after so be it. I’ve had a great time at Man City though.
“I’ve been there since I was 12, before the money. Stuart Pearce was in charge then and I’ve seen it all change. It’s been great to be a part of it.”