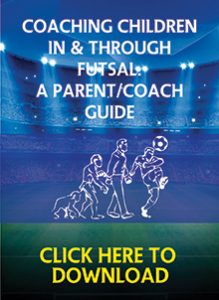 First a lesson learnt from last week; don’t take a holiday whilst teams are playing futsal leagues. Thought I had everything in place and then something goes ‘pear shaped’ and I’m on a boat with internet available at £10 an hour!

Great to be back lesson learnt.

What a start, two entertaining u11 matches at YMCA. Seven Seas have spells when individuals pick out passes that you normally only see at an older age, and then only from finely tuned football brains. Individually and collectively they set the bench mark. Opposition was bottom of league NTC who was baptising four new players for next season. First half was dominated by Seas; NTC had few chances which they failed to capitalise. Second half they showed a marked improvement, scored two and kept game close.

Yes they lost both halves but from a coaching angle they achieved a lot, measuring second half to first, they was greatly improved. They have also unearthed a lady player gem.

Moving onto second game – Keelby (lower end of table vs. Synergy (top end). First period Keelby surpassed them opening up a 5-2 lead, played off some scintillating counter attacks. Half time they changed all five players and introduced a less experienced five. Could new five take Keelby over finish line? Not quite but how they tried, cajoled by coaches that mixed positive advice with enthusiasm. Synergy played their part digging themselves out of a hole to level 7-7. 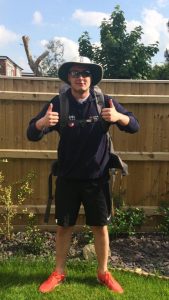 Brad Milne dressed for his charity event in Rhwanda
2017

Same night I’m receiving praise for referee Brad Milne who in turn is singing praise of new trainee referee Dan. Dan is great futsal player who looks like he will make the cross to a great referee.

Same day I get email from Ginga.com, serious futsal people and they are giving away my book Coaching Children in and Through Futsal as a FREE E-Book.

Better still my writing partner has just been made a www.gingasports.com ambassador, opening more doors for Grimsby futsal.

What more can week offer? Day one has been a great start.