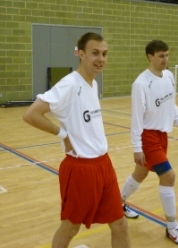 First game was against a Leeds team comprised of a smattering of ex Leeds national league players, we won a tight game 4 2. Second game was against a team from Northumberland and which we won 7-1. Team played really well. The fact they finished runners up in group illustrates how well we played. Third game was against Grimsby Borough (formerly playing in Grimsby League as GSC) we came out on top 7-3 in a match that was a good advert for Grimsby futsal. The Borough lads never gave up and also congratulated us and supported us when we were played, which was greatly appreciated. Fourth game was against Whitley Bay Futsal which we won 3 1, by then everyone was shattered and we’d already qualified so we played within ourselves to just run the clock down. Everyone was superb, the next round is December 13th in Leeds when the FA National League teams enter the competition. We will be up against the best teams in North of England.
Hoping for a good draw now that we’re through and seeded!!
Mathew Payne
Well done Franklin and Borough, most of Franklin have played ‘group futsal before, for Borough team it was a first experience of ‘competion’ futsal. Next time team will be on the front foot knowing what is expected.
Grimsby’s Dan Mawer also played his part as a match official.
Well done everyone for stepping up to mark.
Kevin Bryant