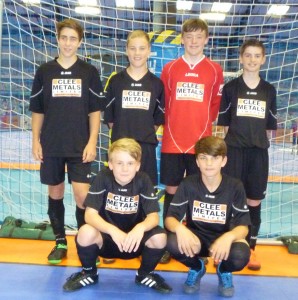 Clee Metals and YMCA represented Grimsby in a competitively fought under 13 tournament at the Leeds Arena.

After the group stages Clee Metals and YMCA was positioned in semi final positions. Clee won their semi comfortably whilst YMCA lost to the Leeds team that went on to beat Clee in a closely fought Final. Clee was excellent in the Final but was beaten by a well tutored Leeds side that had the advantage of being able to call on fresher players. 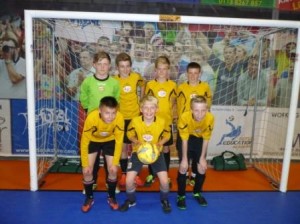 My grouse on behalf of the Clee team was they were not playing off a level playing field – tournament rules stipulated 7 players in a squad. The same rules were stretched by the organisers to allow Leeds to use 7 players in a game. With a very strong squad this allowed the Leeds manger to play a game and then rest same players; a huge advantage in a tournament, particularly with the high standard of player at his disposal.  Not sour grapes, just an observation on behalf of the Clee Metals team who would have had fitter players for the final if they brought sufficient players to rest 5 players after every match.

Leeds Tournament facilities and standard of futsal was excellent.  Clee Metals played every game with only one sub, couldn’t have asked for any more from my players, they only lost one game and that was the final, they only conceded 3 goals in the whole tournament.  Well done Clee Metals 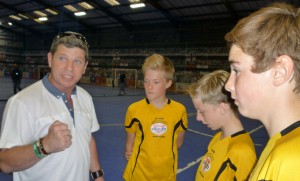 The Leeds Arena is a purpose build venue with 8 small courts, spoiled only by the fact that the separating nets are inches from the touchlines and managers had to substitute players from behind the goal line not the touchline as is proper. For fewer than tens this would be fine, but for young adults not so good. The nets can be withdrawn and the 8 courts merge into 4 larger courts, this would certainly have advantaged the Grimsby teams and probably the opposition, a point accepted by the organisers and one I would insist on for when we return. A Grimsby vs. Leeds vs. Liverpool; tournament is under discussion.

The Management told me that they had now had 6 teams from Grimsby visit and it was clear from the 6 teams Grimsby was at forefront of junior futsal in Yorkshire and Humberside. High praise indeed.

Event was a great opportunity to compare Teams standards of play against quality ‘inner city’ sides that included Academy players. Our lads were up to the task playing excellent passing futsal in challenging circumstances.

An excellent experience for all concerned at impressive Leeds Arena. Looking forward to next visit.