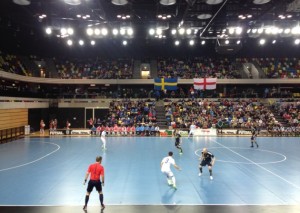 England vs. Sweden at Copper Box

East London’s Copper Box Arena will play host to futsal action again next month as the Soccer AM Cup comes to the capital on May 17.

And we have free tickets to give away to readers who would like to attend the event, thanks to Sky Sports’ Soccer AM.

To be included in a draw all you have to do is email your name and contact details by the close of business on Friday, May 8 to group sports editor lee.power@archant.co.uk.

It marks the culmination of a tournament that has seen under-19 sides from across the Football League take to the indoor format of the game.

The day kicks off with the semi-finals of the competition and ends with the final, but also includes a game between a Soccer AM team, led by the show’s host Max Rushden, and a Select side.

Thurstable Cheerleaders and Fat Mammas Dancers will also be performing at the venue, with live music throughout the day.

It is hoped the event can build on the success of the England futsal internationals against Sweden earlier in the year, which drew a record crowd of 1,400 supporters to the iconic Olympic venue.

Tickets are also on sale for the event, with adults costing £3 and under-16s and full time students paying £2.

There are also family tickets, admitting two adults and two children or one adult and three children, costing £8.

Teams can apply for a special deal, admitting three coaches and up to 16 under-16s for just £25.

Tickets can be purchased from ticketline.co.uk.

Television cameras will also be in attendance in Stratford with the crowd having the chance to see themselves on television when the action is shown on May 23.

The Soccer AM Futsal Cup is comprised of male student players, participating in The Football League Trust Education & Futsal programme.

FLT Futsal offers 16-18 year old, boys and girls, a once in a lifetime opportunity to play futsal for their local professional football club, while studying towards a BTEC in Sport over two years. 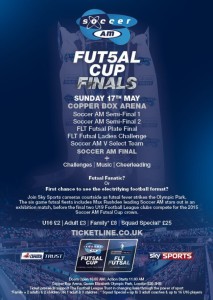