England manager Michael Skubala hailed his team’s professionalism as they kicked off the Four Nation Tournament with an emphatic victory over hosts China. 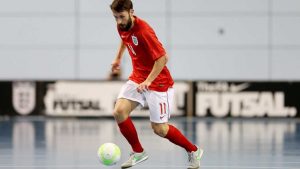 Despite being positioned 13 places below China in the world rankings, who were roared on by a hopeful crowd in Changsha and watching TV audience, England produced a fine display with two goals apiece for Danny Ward and captain Raoni Medina, before William Wallace finished things off.

Skubala said: “It was a real professional and resilient performance from a group with some young players in the squad and some earning their first caps.

“They showed real maturity and resilience as China through everything at us.”

China initially dictated the tempo, but it was Skubala’s side who went ahead when Medina finished off an excellent set-piece from James Webb.

Medina then setup Helvecia team-mate Ward to head in the second.

Ward soon added a third and, as China pushed for a way back, England remained ruthless in front of goal.