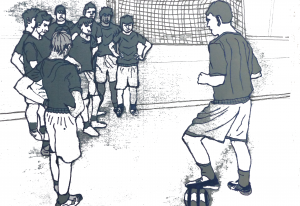 What did he do that was different?

For a start he included the parents in his team talk.

Makes sense; if the parents don’t buy into your plans how you can expect the players to? These by the way are 13 year old players, but same would apply any age.

If when your protégés has the ball it matters that the parent coach are on same page. How many times have I had a parent call his player over at a training session to tell his lad to do something I would not approve of, many times that parent was giving wrong information.

The coach/player and parent are a trilogy; it takes all three to get a player to an elite level. The parents that get their protégés to the top will not hesitate to move to the next best coach, no matter how far and inconvenient the travel.

The next best coach means just that, it does not mean to a team that is top of the league, that coach may be a win at all cost type of guy. The one who charms with promises to recruit best players, knowing at same time who is leaving team at new player’s expense.