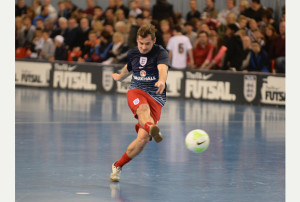 BURTON-UPON-TRENT, ENGLAND – NOVEMBER 08: Luke Ballinger of England during the warm up before the Futsal International match between England and Latvia at St Georges Park on November 8, 2014 in Burton-upon-Trent, England. (Photo by Tony Marshall – The FA/The FA via Getty Images)

Pip, the main character in the novel, becomes a gentleman of London, thanks to a mystery benefactor. And baring similarities to the story, Ballinger – who in his teens was a prominent player in the Bristol City youth set up – mentioned that a mystery man helped him forge an international career in the game.

Going back to 2007, where it all started, the 27-year-old said: “I played for a team in a local league in Chippenham and after winning that league we eventually made it to the nationals finals in Sheffield.

“It was there where some guy, and I still don’t know who he is, came up to me and said I’m going to recommend you to the England futsal manager.

“At first, you don’t think anything of it, but we got to the final of the plate against Preston where I scored six goals.

“And again this guy appeared and said he (the England boss) was watching.

“Again I didn’t make anything of it, but about two months later I had a voicemail saying I’d been selected for the squad to go play out in Izmir in Turkey.”

After a record 96 appearances and 50 goals, the most scored by any England player, Ballinger still wonders if that man is still around.