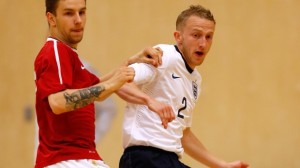 The Three Lions face Cyprus in their opening group game in Northumbria on Thursday and Mortlock wants to show the progress they have made in the last 12 months.

“All the players agreed we were poor last year but this time the expectation is to win,” said the experience forward.

“We have to play good Futsal this year to prove that we have progressed and for us to build momentum going into the qualifiers for the Euros and World Cup next year.”

And Mortlock, who made his 50th appearance for England during a 3-3 draw against Sweden in February, has spoken about the excitement he still gets when he pulls on the national shirt.

“I love playing for my country, especially with the lads we have now and I want to play as long as possible,” he added.

“To be part of the squad, getting to put the shirt on and singing the national anthem – it feels great.”

England and Cyprus are joined by USA and Qatar in their group. All matches will be held at Northumbria University in Newcastle from Thursday 5 June to Sunday 8 June.