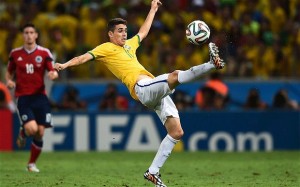 Germany 7 Brazil 1 rather takes steam out of this argument, it shouldn’t, 3 of the last 4 countries futsal is their main game.

Brazilians’ childhood immersion in futsal shines through the play of many of those like Oscar lining up in the World Cup semi-final against Germany in Belo Horizonte. The small-sided game with a heavier ball that enhances skill and decision-making is now considered one of the important elements in the long-term task of making England a force again.

England returned from Brazil embarrassed by an early exit and the obvious technical limitations of their players as well as flaws in their decision-making, responsibility-taking faculties. This continued a decade-old debate of whether the nation’s youth development system is focused on the right approaches. The Football Association, following a more enlightened path, acknowledges the usefulness of futsal and will be encouraging more clubs and schools to take up the sport.

“Futsal is like a cauldron for learning where everything is heightened and accelerated due to the fast-flowing and non-stop nature of the game,” said Nick Levett, a former England futsal international and one of the driving forces in the introduction of smaller-sided games as FA national development manager.

“The obvious benefits are lots of touches as there are fewer players. The ball is easier to control as it’s slightly heavier with less bounce than a normal ball. You develop one-v-one and skills in tight areas. Fast decision-making is needed as the ball has to be passed back into the pitch within four seconds if it leaves the field of play.

“It’s good for goalkeepers’ reaction skills. It’s tactically like a condensed game of 11 v 11. There’s lots of counter-attacking which reflects the modern game.”

Neymar is a devotee. So was Pele growing up. Xavi and Andrés Iniesta honed their admired technique partly through futsal.

“If you look at the background of many top Spanish and Brazilian players it was part of their player-development programme,’’ continued Levett. “Xavi and Iniesta talk about it being the key tool to helping them play in tight spaces and being comfortable receiving the ball when marked or when outnumbered.”

Futsal-inspired goals have graced great occasions. “There was a goal from Ronaldinho when he was at Barcelona against Chelsea in the Champions League a few years back [2005], a toe punt from 20 yards, that everyone here criticised for bad technique,’’ laughed Levett. Ronaldinho’s finish culminated a shimmying run and was fully intended, being from the futsal canon. Many English observers were simply not aware of futsal techniques.

The style has been seen at this World Cup.

“Oscar scored in the first game for Brazil [against Croatia] with a similar finish, shooting early with the toe and not allowing the goalkeeper to get set and ready,’’ Levett said.

Fernandinho scored with a toe-punt against Cameroon. In Wednesday’s Sao Paulo semi between Argentina and Holland, fans can admire how Lionel Messi’s futsal past helped shape his brilliant present.

Now the English are becoming believers.

“We are fairly new to the scene – we started about 2005 – seeing as the game has been around since the 1930s,’’ added Levett, “but as a version of five-a-side we used to play one with an inflated tennis ball, no overhead height rules and the ability to smash people against walls! The rest of the world learn to play in tight areas and when under pressure.

“There is a lot of correlation between top-ranked football teams and top-ranked futsal teams but it’s not an exact science. Germany, for example, have less background in futsal than us but there are professional leagues in Italy and Spain. The Premier League have introduced festivals and tournaments for younger age groups over the last four years as part of the games programme for academies too.’’

Futsal can play a significant role in England’s future. “Is it the panacea?’’ asked Levett. “No. Is it part of the solution? Absolutely. It is seen as a major part of the development programme moving forwards. There are more and more youth leagues now running this as their winter option for grass-roots football such as in Shropshire, Hull and Sheffield, and I can only see it growing.”

Good. More futsal in schools should also be a target.