Manchester City youngster Adam Drury has emerged as the right-back Peterborough United are trying to sign on loan for the rest of the season. 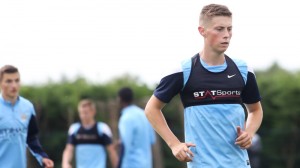 Peterborough United today (July 1) confirmed that the 20-year-old is training with the club with a view to signing a year-long deal.

Drury (20) was on loan at Burton Albion last season when he helped ‘The Brewers’ to the League Two play-offs. England youth international Drury joined City from Grimsby in 2011 and has yet to make a first-team appearance for the Premier League champions.

Posh are seeking a right-back to replace Mark Little who joined Bristol City last week. Craig Alcock is mulling over a new contract offer by Posh.