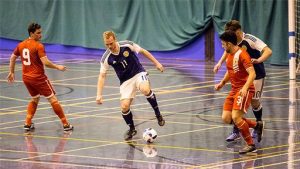 At the start of next month, Scotland will host the Futsal Home Nations Championship at Oriam in Edinburgh and new head coach Gerry McMonagle has named his squad.

The hosts will be looking to better last year’s third placed finish where they lost out to England in the opening game and ran eventual competition winners Wales close, ultimately losing 5-2.

The Scottish Futsal team is still in the early stages of its development after being established in October 2014 and were knocked out of the European Championships preliminary rounds earlier this year, losing to Georgia, Switzerland and Israel.

McLeish made history in the last Home Nations Championship when he notched Scotland’s first ever hat-trick, scoring three against Northern Ireland.

Entry to matches will be free of charge at Oriam with all games taking place in the indoor court.

Futsal is a 5-a-side version of football with unlimited substitutions and 20 minutes a half. The game is played with an optimised ball that does not bounce as much as a traditional football.