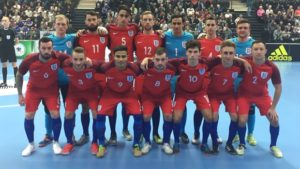 In front of a sell-out crowd of 2,510 and shown live on German TV, the Three Lions took on Germany in their first official Futsal international and the first of two back-to-back friendlies with the teams meeting again on Tuesday.

And it was Germany who started the stronger and made a number of direct attacks before England came into the game, hitting the woodwork through Stuart Cook.