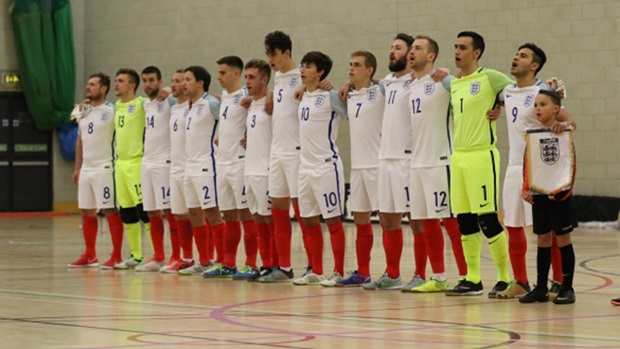 England lost Saturday’s opening game by 2-1, but they slipped to a 3-0 defeat the following day in what was a festival of Futsal at the venue.

On Saturday, the fans made plenty of noise as the Three Lions made their way onto the court, however both England and Finland made a tentative start to the game.

Both sides kept possession well as they tried to create opportunities and it took the majority of the first half for the deadlock to be broken, with Arber Istrefi dancing past his marker before firing into the bottom right hand corner to give the Finns a half-time lead.

But England came out after the break determined to get themselves back into the game, and that’s exactly what happened six minutes in, with William Wallace brilliantly reacting to a deflected effort before prodding home.

Then the Three Lions took the lead midway through the second half thanks to a fantastic piece of skill when a reverse through ball was played into Raoni Medina, who controlled the pass before turning and drilling his effort beyond the Finnish stopper.

Finland continued to put on the pressure by utilising their goalkeeper as a fifth outfield player; however England defended for their lives to hang on to a priceless victory.

The following day saw a repeat of the fixture, with the only difference being the two sides’ change of kit. Like the previous evening, it was Finland who took the lead with a lightning start that saw the Three Lions concede an own goal within seven seconds! England fought back in search of an equaliser, hitting the post and having several shots palmed away.

As England continued to miss opportunities, they were made to pay five minutes into the second half, as Mike Kytola produced a deft finish to double Finland’s lead.

And the misery got worse for the Three Lions, as they failed to clear their lines, allowing the Finnish striker to run through and slot home as a quality, clinical performance saw Finland come out as 3-0 winners.

You can watch highlights and goals from both games via the Norfolk County FA, by clicking here.
Read more