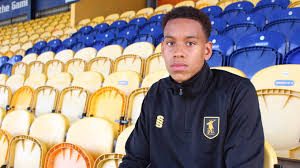 A pre-season dressing down has helped propel Mansfield Town’s young England Futsal starlet Alistair Smith into the first team reckoning. The tall midfielder put in an assured debut in last night’s 3-2 Checkatrade Trophy win over Scunthorpe United, but boss David Flitcroft said: “I remember watching an U21s training session in Portugal and I pulled him out of that and ripped strips off him. “Out of possession he didn’t really do what we wanted him to do. “I remember running him down and telling him what he had to do to improve and he’s done that. He’s battered the gym, gone out on loan, and played the Futsal. “So much work has got into him and every credit to Mike Whitlow, Richard Cooper and John Dempster for getting him the right loan move and making him understand the pressure of winning football matches affects everybody. “That dressing room you go into, if you don’t track a runner or do your out-of-possession work, it could cost the manager their job or someone a £50 win bonus in non-League. “He has now found that, along with his Futsal work.” Flitcroft continued: “He is still growing. We think there is growth in him. “He was untidy with his feet. But now, with the balance of training with us and with the Futsal team, those things have combined to help make this kid as asset to the football club. “He is our club-developed player in the team at the moment on merit.”