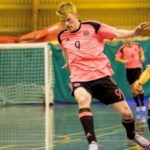 “It’ll help players develop their individual skills, their tactical knowledge. Overall, it’s got a lot of things going for it,” he said.

The five-a-side game is played widely in South America and across mainland Europe and many of the world’s best players – Lionel Messi, Neymar and Cristiano Ronaldo among them – learned their intricate ball skills on a futsal pitch.

Futsal is played with a smaller, heavier ball on a court similar to a basketball court.

“It’s a game we see very much as something to explore along with other formats of indoor football,” McClair told BBC Scotland. “It’s a microcosm of an 11-a-side game – lots of touches, it’s a very tactical game.

“I’m a great believer that if it looks like football, it probably is football and if you’re practising those elements of it, you can only get better at it.

“It can only be a good thing – the opportunity to get lots more touches, to practise one v one situations, both attacking and defending. If there’s an opportunity to develop it from a very young level, it’s something we should be exploring.”