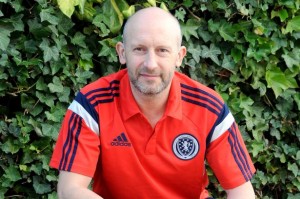 Mark has a Grimsby connection! I have a ‘T’ printed 2003 to prove it. I travelled some time before 2003 to meet up with Mark to find he had the same passion for futsal as me, and was meeting all the same stumbling blocks, namely the English & Scottish FA who both was, that time, negative and unsupportive of futsal. Road blocks were put in front of us, for those that do not know the story, as a last throw of the dice I rang FIFA and actually got positivity. So pleasing that Mark’s stellar work has been rewarded. Kevin Bryant

It’s a game that could hold the key to future Scottish football success.

Futsal originated in South America in the 1930s and provided the starting point for Lionel Messi.

Played with a smaller, reduced bounce ball, the game places emphasis on technical ability and has recently burst onto the scene across Scotland.

The interest has the attention of the SFA, and in January next year, Scotland will send a national futsal team to a European Championships for the first time.

Pioneered in Perth, Potter has watched with intrigue as the sport has developed and gripped a nation.

He said: “There are four leagues up and running now, with a further three commencing before Christmas. It’s unheard of and unprecedented.

“It all started in Perth. For the last 12 months, we’ve been working with the SFA to see if they would support other adult leagues.

“I’ve been 17 years at this. After three years we said that the objective was to get a team into the UEFA Futsal Cup, which is the club equivalent of the Champions League for Futsal, which we have ever since 2006.

“That was aim one. Aim two was the national team. That box can be ticked off too.”

Trials were held in Perth last month, with 64 players bidding to make the squad.

Among a host of local talent, the team is laced with experienced former professionals – James Grady being one of them.

“From a Perth perspective, we have a lot more players that can play futsal,” added Potter. “When you put them in against non futsal players, you can see the difference.

“I think that was a big thing for the SFA. They thought, hang on a minute, this isn’t the same sport.

“James Grady is in the squad, Garry Hay ex Kilmarnock and Ross Chisholm ex Hibs. We’re coaching them because they are physically capable and can clearly play.

“We needed to provide a bit of strength to support the futsal players. It’s trying to find a balance.”

Potter praised the SFA, claiming the partnership has been first class.

The raised profile of futsal has provided the platform for local youngsters to represent their country – and that for Potter – makes it all worthwhile.

“The SFA are doing a brilliant job and are working really hard,” he explained.

“We’ve carried the baton. I always knew the day would come, but the SFA have been absolutely brilliant with it.

“There’s going to be opportunities for young guys in the area to represent their country at the highest level.

“One of the Perth boys said ‘Is that Ross Chisholm, I used to pick him on football manager’ – you’re now playing with him. What an opportunity.”

Scotland have been drawn in a group with Sweden, Israel and Armenia.