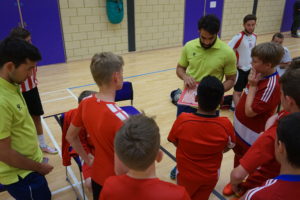 Alfonso coaching the kids in a match to round off the camp.

“It’s the second year we have done it, this year with Middlesbrough Futsal Club and Perth Youth Futsal and both clubs were really great hosts. The coaches and children alike had a fantastic experience and it was great to see the local children learning from the Spanish and vice versa,” said Damon Shaw.

“Kids from Spain are very keen to learn English and more play futsal than football, so a summer camp that ties in both is a really attractive trip for them. It also adds a big plus for the local kids, as it’s not every day you get to train with Spanish players and professionals.” 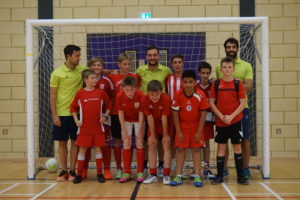 The camp runs every year, bringing international students to the UK for a learning experience and contributing to the growth of domestic futsal.

“I’d like to thank everybody involved, from the host clubs and families to the children who attended and Catgas Santa Coloma for helping with two players and promotion of the camp to their players,” concluded Shaw.