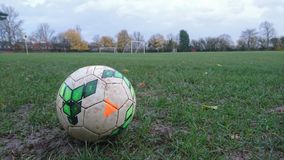 Sunday, after a sizable break, I went to watch my 11 year old grandson play 9 aside football. What a massive difference from watching some of the same lads playing futsal. Playing futsal the lads are on flat surface, the court is small so the players have to demonstrate close ball techniques, the game is fast, not hampered by a large muddy pitch that the football lads had to conquer before they could think about playing football. 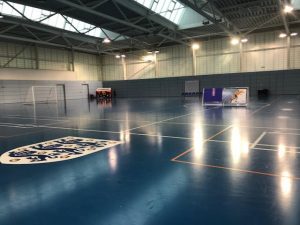 The futsal player has no excuse for a bad pass; the footballer has many excuses, all rational and real. For a start he has to look at ball till the last second, the ball could hit a divot at any point, only when the player has the ball can he look up and assess the options around him. Too late, you have to evaluate before the pass arrives. 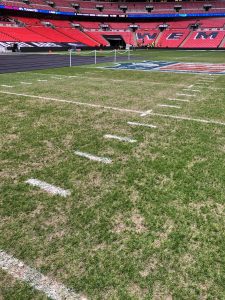 Could have been worse, this was Wembley after an American football match. Tottenham played Manchester City on it one week later.

Saturday, by contrast, I watched Chelsea vs. Manchester City on television. The teams were playing football on a manicured pitch. Cut twice every day, underground irrigation and heating systems, my grandson and his mates would love to play on such a pitch. If they could their passing levels and passing choices would improve hugely.

Finally to the ball, the day was freezing cold and every long kick was preceded with a dead sound as boot struck a ball devoid of life. One player headed a high ball and ended prostrate to the floor. It had hurt; it had been like heading a brick. A new ball was found and air taken out of it before game proceeded.

Cheap footballs are a danger; they have a very thin plastic outer skin and a wafer thin bladder that offers no protection to the skull. More expensive match balls, if genuine, have a thick bladder and a softer leather outer layer. A futsal ball is seldom headed, but it does happen, the futsal ball bladder is filled with foam rubber, making it 100% more safe than a football, as the pole axed youngster would confirm. Click to have a look inside a futsal ball.

On the flip side, it can be great fun playing on grass and when you’re young the pitch and weather is forgotten because you’re playing with your mates.

Sure you will have your own opinions.