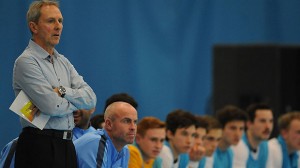 And Sturgess believes two hard matches will be just what his squad needs after their Euro Qualifiers last month.

“We know these games will be very tough as our previous games against them have indicated,” said Sturgess, who saw England lose 3-2 and draw 2-2 in Sweden last February.

“They have a talented squad that is well organised and this will always ensure that they are competitive.

“But this is just the test we need to help us recover from not qualifying for the Euros. We will have to focus all of our efforts and concentration in order to compete with a Sweden side who have established themselves with real credibility on the Futsal stage.”

The reaction from Futsal fans for these games has seen all but a handful of tickets snapped up and Sturgess and his players are anticipating a good atmosphere for both games.

With two closely-matched teams in action too, he’s hoping the Three Lions can put on a show too.

“We know the two games will be competitive, yet sporting,” he added.

“And I know the growing support for the England Futsal team will enjoy the spectacle of playing at the iconic Copper Box venue for the first time.”
Read more at http://www.thefa.com/news/england/development/2015/feb/peter-sturgess-sweden-preview-270215#T9E54hm1WyrZgDlU.99