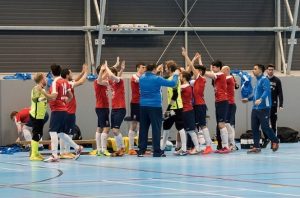 Head coach Junior Roberti believes newly-crowned champions York City Futsal can go from strength-to-strength after masterminding their rise to the absolute elite of the game.

The Brazilian identifies the recent merger with the city’s football club as having massively improved the potential of a side that clinched a second successive National League Division Two North title at the weekend.

Now having won ten straight games until being finally held by nearest challengers Tranmere Rovers at the weekend, still unbeaten York will next compete in Super League North against traditional powerhouses of the game such as Birmingham, Manchester and Loughborough.

“We had a merge with York City FC; that was great because of the impact in the community, visibility, etc,” Roberti told Futsal Focus. “We are attracting 100 people as an average attendance at our matches and yesterday 208 people watched our game in the sports hall. So I believe this is thanks to the football club backing up the project.

“We also managed to get a great group of players from abroad and also from Middlesbrough who have helped us a lot to build a very good squad,” he continued. “We are very solid, and so far we are working very well, including bringing in very young players into the squad. We had 4 U18s in our games so far.

“Finally, York is learning to love the game. Again thanks to the football club we are regularly in the main newspaper and this brings a lot of visibility.

“So, York now is in the best moment for Futsal but we want more, we want to fly higher. Super League next season and a strong FUTSAL player factory, this is the plan!”