The score tells you everything, but not the complete story.  Make sense? 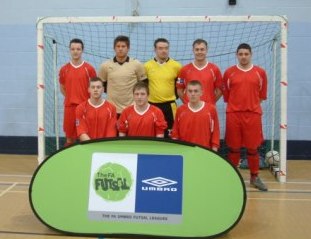 Grimsby training had highlighted the fact that we was behind schedule to be playing teams that train twice weekly to play futsal twice monthly.  Two great saves by Leigh Graves in the opening 2 minutes play was a stark warning that the task ahead was challenging.

Off the field Sheffield & Hallam County FA had a bench of 7 outfield players, a Brazilian coach and 2 highly qualified FA Coaches with long experience within the professional game.  I was on my own apart from 2 substitutes and a duplicate keeper.

Thanks to the players the next 18 minutes was exemplary, for long periods Grimsby controlled the game, brilliant ball retention stretched Sheffield all over the court.  When the opposition had the ball a solid ‘diamond’ defence held solid.  Such was the performance that we led by a Danny Hornigold ‘stunner’ and a Callum Blyth ‘hot shot’ the keeper parried but which carried over the line.  The one moment the defence failed to track a run cost a goal.

The second half started well, a short corner played back to Leigh Graves (GK) who hit the post from just inside the opposition half.  3-1 it might have been different.

Kirk Russell made a goal line clearance which defied believe, he must have made up 20 yards to clear off the line, I had it marked as a goal before he appeared from no where; simply brilliant.

By this point Danny Hornigold had left the pitch with  blisters to both feet, leaving 1 player on the Grimsby bench; not enough given the pace and dynamics of the game. 2-2, 2-3, 2-4.  At each point we had to push on, a goal might just have got us back into the game; the truth was the energy tank of Sheffield had taken over the game; the Grimsby players faces told me everything; they would not admit but they had given their all.

The team debrief was simple:

1. The first half was a performance to be proud of. If the first half can built on, which it can, then Grimsby is a formidable team.

2. A series of first half highs followed by second half lows has to be halted.  For our next match the squad needs to be 10 outfield players to at least match the opposition in player rotation.