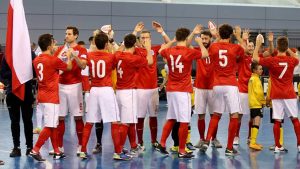 For your information teams play from age under 9 through to seniors.

Watch this space for younger age groups that are due to start shortly.

One of the great things about futsal is that it has a career pathway via GTFC Futsal Scholarship. Players are leaving GFL aged 17 and joining the Scholarship and then moving onto our top Universities to study and continue playing futsal under stewardship of highly qualified coaching staff. Three are currently at Loughborough. This year GTFC has extended its course and tied in with Cardiff University so that players can study and work at home for their degree, removing the cost of university lodging etc.

As well as opening up long term opportunities futsal was shown in a 2017 UEFA study to be a better training tool to play football than traditional methods. The study showed that players brought up on a small futsal court were quicker and better passers than the traditional players. The UEFA study is attached.

Futsal is a win win situation.

Want to play, just make contact and you will be made welcome as part of this great game.