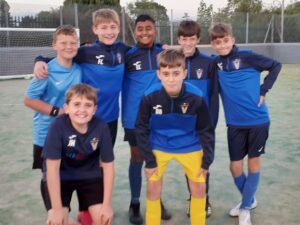 Parents and managers also deserve great credit, four of the teams travelled from Healing and Keelby.

Oh; and I missed mentioning  Neymar, Mbappé and Messi were on TV playing Manchester City in the UEFA Cup and still everyone attended.

Healing and Keelby mangers must also be commended for the progress their respective teams made this week.  All four teams will go into next week’s matches confident that they can cause opposition major issues.

Playing teams with vastly more experience is a challenge every new team to futsal will have to face.  Yes futsal is played with a ball and scored by putting a ball into a net.  Difference are huge, futsal players play on a smaller court with a heavier ball, players have to thing quicker and at higher levels have numerous tactical plays that a footballer cannot be expected to step into.

Closing the gap on the experienced teams is a major challenge, welcome to futsal; hopefully you love the game as much as I do?

Picture is Catenaccio who play in the u13/14 league. Playing mainly against older opposition they have given every opposition team a run for their money, this week this all changed with a win, a win brought about through the mantra pass; pass; pass.  Smiles tell you everything and this before the win!