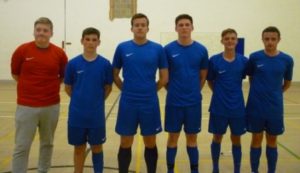 Received following futsal endorsement from a parent. The Futsal Development studies Mr Orr mentions can be found at www.grimsbyfutsal.co.uk alternatively e-mail me at info@futsal.org.uk and I will send you a copy.

Just read study ‘Futsal Development tool for 11 a side.’ I agree with the author; when I watch my son Ethan play I have observed his development improve thanks to consistently playing futsal.

He was a good player but playing Futsal has made him a better player even more so being on the GTFC Futsal scholarship which, you have probably witnessed yourself, so yes it is a great thing and actually more entertaining end to end none stop football/Futsal.

The FA has to see this and finance it somehow for the sake of our national team.

When it is said the premiership is the best league in the world you would have to agree to a certain level as it is full of foreign players that have played Futsal that has developed them and give the confidence on the ball etc.