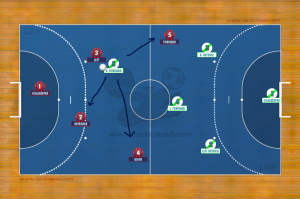 As score suggests Giants dominated every department of the game. Four goals up at break they kept foot on peddle in second half with a further five goals.

Clee had their half chances, but needed to take them all to be in with any chance.

Clee badly needed a player to keep play on the floor and link defence to attack. Keeper joined in with outfield play late on, which added a much needed dimension to teams play.

Only a goal in it at the break thanks to some great saves from Omar in Ym goal.

Second half, for most, was an Omar one man show. Now playing outfield Omar scored a staggering 6 on the bounce to take Ym to an unassailable 8-1 lead. Lions scored couple late goals to add respectability to score line.

Score was 6-0 to Cody All Stars before Phenom got on score sheet.

Phenom had a tactic to keep a target man up front. Great when it works, but to keep to same system when it’s not working is not working is questionable. Top futsal teams rotate their positions, YouTube has all the answers.