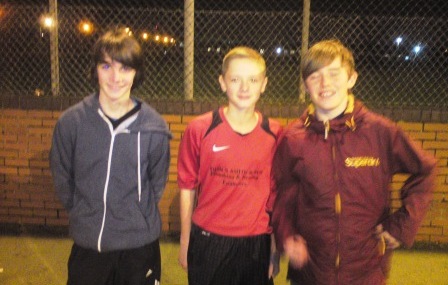 Feature of night was the standard every team had come back at, every team was sharper. N Waltham was no exception, unfortunately they are caught in the trap were every other team is upping their game. The gaol they scored was superb, bettered only by the goal of the night by J.Loftus (LD). A powerful cross goal header from a corner, outstanding.

Eagles took the lead, was edging the game, but found themselves three goals down at break, unexplainable. Dragons, including three new players improved as team grew to know each other and well worth win at the end.

Brilliant game, like two great boxers testing each other but unable to deliver the knockout punch. Lions paid the price of having no substitutes, when teams are so closely matched not being able to rest players can be crucial.
GSC Dynamite    1    YMCA Spartans    9

YMCA got off to a flyer and kept ‘foot on the pedal’ for full game. Passing was key to the win, none of the goals was great power shots, most was ‘passed’ into the net. Dynamite are one player from getting results.

THE CHALLENGE IS TO FINISH IN THE TOP 6 FOR THE £100 VOUCHER.