The FA has changed the way small sided football is governed by Lincolnshire Football Association Ltd.  Taken some time to understand and accept the process, but will be an improvement once up and running.  The changes to governance will benefit greatly from the Welfare & Safeguarding aspect.

I managed to attend three courses during my August ‘break’.  Welfare, Safeguarding and First Aid. Noticeable that both courses were filled 50% people travelling from Grimsby.  More courses we can all support at Bradley the better.

Talking of courses there are two coming up at Bradley that I shall be attending, maybe one of which ought to interest several of you.  The LFA are waiting on a date from Marc Birkett to deliver a full day futsal referee course. For those that don’t know Marc, he is the FA’s top referee who has refereed a FIFA World Cup Final.

Michael Brader at LFA has informed me that the Futsal Referee Course is now a standalone course, previously you had to be a qualified referee to do the futsal course as an ‘add on’.

The second course is a Walking Football referee course. It is estimated there are 40 – 50k players 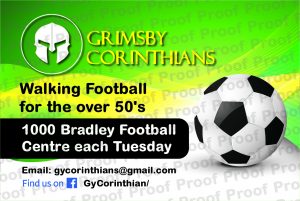 playing weekly across the UK.

An updated set of Grimsby League Management Rules can be downloaded from www.grimsbyfutsal.co.uk

The big change is the introduction of the Power Play law across all Grimsby junior and youth leagues.