After spending all day Sunday under the guidance of Frank Broughton (East Riding County FA) the following 11v11 referees updated their football qualification to include futsal. 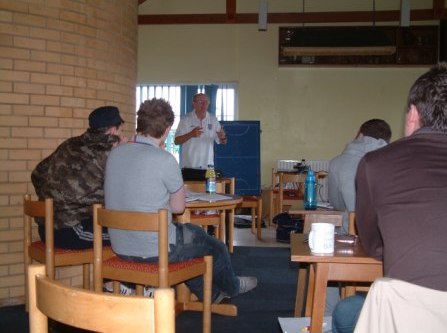 David Cass, Dean Gladwell, Michael Rice, Kevin Bryant, Kirk Russell, Charles Jillings, Daniel Mawer, Dan Fidlin, Gavin Broughton, Gavin Sartain, Daniel Hornigold.
It has taken some considerable time to get to this point; The Premier League is in its 14th season!  That said we now have an 11 futsal qualified referees to call on, which is exceptional.


To add to the success Daniel Durrosimo passed, on the same week end, his full sided referee course.


For those that like to moan at referees I would like to remind them that the referees pay for their own course fees, give up weekend’s to accomplish the courses.  When that’s finished they still need to complete a ‘child protection’ course, complete a CRB check and referee 10 matches before finally receiving their FA badge.
Whilst we had 11 referees updating their knowledge inside the Novartis club teams outside was playing without a match official because of the shortage of qualified officials.