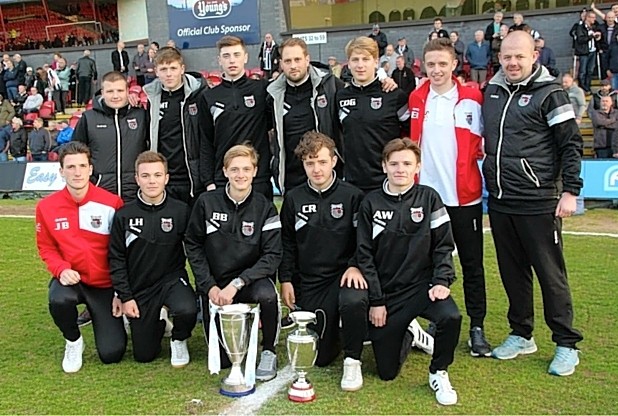 IT’S been a season to remember for Grimsby Town’s Futsal stars – but they’re far from done yet.The club’s five-a-side specialists have simply been unstoppable this season, and now they’ll be aiming to add even more silverware to their collection as they prepare for the National Finals in Birmingham.

After lifting the Kinder+Sport Cup back in March, the Mariners have completed a double by winning the North East Division’s League One in real style.

The A team dropped just two points on their way to finishing the campaign unbeaten, which means they qualify for this month’s finals – and they won’t be the only Blundell Park outfit heading to the midlands.

The B and C teams also finished top in Leagues Two and Three respectively, while the D team qualified after winning their final two games against Scunthorpe and League Four champions Sheffield United to finish second.

The A team will head to Birmingham on June 15, while the B, C and D sides will be in action a week later on the 21st, 22nd and 23rd respectively.

And, after dominating on all fronts this season, education officer and coach Mark Westerby is feeling confident about the sides’ chances – although he expects them to be seen as a major scalp for their opponents.

“I think we’ll be going into the nationals strongly with all four teams,” Westerby told the Telegraph.

“The A and C teams both won their leagues quite comfortably, while the B team had to battle with a good Scunthorpe side and ended up winning on goal difference.

“I’d like to think the A team would go into the nationals really strongly after winning the league and winning the cup earlier on in the season.

“But at the same time because we won that National Cup, everybody will want to beat us now, and the teams we beat in that competition last time will be looking to get one over on us.

“We’ve trained hard all year with the long term goal of being successful in the league, but with one eye on the nationals because that’s where all the best teams are, so we want to go and prove ourselves as one of the best now.”

It’s certainly been a season to remember for Town’s Futsal aces, and they now have the chance to finish things off in real style.

But, regardless of what happens in Birmingham, Westerby and his players can certainly hold their heads high after a remarkable campaign.

“For me, the most important trophy of the season was the league.

“A league title shows dedication week in, week out – you’ve got to be at it every game.

“Regardless of how the nationals go, we’re so pleased because they’ve been terrific all season. To finish top in three out of four leagues is outstanding.”

Are you aged 16-17 and interested in joining Grimsby Town’s Futsal side? For more information on the course, contact Mark at mark@gtset.co.uk