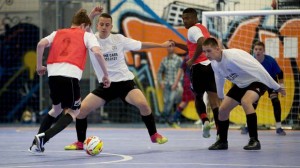 And it promises to be an electrifying day of Futsal, where the top four clubs in the country will do battle for the 2015 championship.

The Grand Finals rounds-off a long competitive season in the National Futsal League and remains The FA’s showpiece event for domestic English Futsal.

With all four clubs having to work harder than ever before to qualify and get a shot at winning the title through their regional leagues, the winners will also progress into Europe and compete in the UEFA Futsal Cup next season.

Consisting of two semi-finals and a Final, the event will be supported by two North and South Futsal centre of excellence games and a North and Midlands Division Two champions game.

Tickets for the event are on sale now and come in three price categories.
Read more at http://www.thefa.com/news/my-football/small-sided-football/futsal/2015/apr/fa-national-futsal-league-grand-finals-tickets-on-sale-220415#uZ7A6yirdvjBIlpp.99