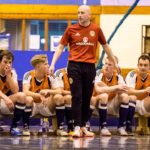 Mark Potter Scotland futsal manager. I first meet Mark 20 years ago and can personally confirm progress has been diabolically slow compared to England.

Conspicuous by its absence at yet another major tournament, Scotland is again spending its summer in gloomy introspection.

UEFA EURO 2016 represents a ninth successive failure and, with the likes of Albania, Iceland and all of the other British and Irish ‘home nations’ in France, none of the preceding eight events have been more painful to watch. Yet while every qualifying catastrophe has been greeted with plenty of soul-searching, an obvious means of improvement has – until recently – been consistently overlooked.

Futsal’s credentials are compelling. A list of the superstars it has helped forge – Lionel Messi, Cristiano Ronaldo, Xavi and Neymar to name but a few – should be sufficient in itself. “If it wasn’t for futsal,” Ronaldo has said, “I wouldn’t be the player I am today.”

Given this, and a football-mad nation in which the weather is reliably inclement and five-a-side football is immensely popular, you might imagine that an indoor, small-sided game would not prove a hard sell. Yet according to Scotland’s first-ever national futsal coach, it is precisely that established five-a-side culture that has helped keep futsal in the shadows.