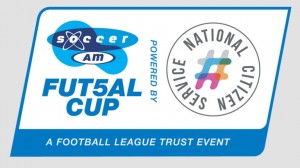 Leeds United took on West Bromwich Albion in the opening game of the day at the Birmingham Arena and it was the Baggies that scored the first goal of the day. However, the goal appeared to spark Leeds in to life as they went on to score four unanswered goals in a 4-1 victory.

path to the first game. Crystal Palace opened the scoring but were pegged back by a more clinical Mariners side that went on to claim a 4-1 win.

The third game of the day saw Carlisle United take on Reading in an end to game that could have easily gone either way. The Cumbrians twice had to come from behind in an entertaining first half before taking the lead themselves early on in the second. However, two quick fire goals from the Royals saw the game turned on its head once again before Carlisle came back a final time

In what turned out to be a theme of the day, Huddersfield Town secured the final quarter-place despite going behind early on in their game with Rochdale. The Terriers went on to claim the lead before being pegged back in an even tie that eventually finished 5-3 in Huddersfield’s favour.

The Soccer AM Futsal Cup powered by NCS is comprised of student-players participating in The Football League Trust Education & Futsal programme.