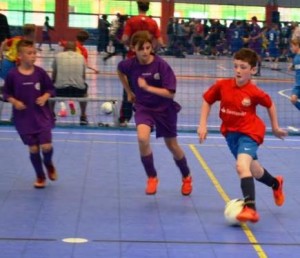 BORN WINNERS: England are desperately seeking a return to the glory days of the 1966 World Cup victory by nurturing future generations

The League One club has stepped up to take on the challenge of planting the seeds of hope for England’s next crop of talent.

All this against a backdrop of racial allegations and evidence of corruption within football’s governing bodies. You won’t get far in our national sport without uncovering some foul play off the pitch.

So Oldham have built the North West’s first outdoor futsal centre. With it will surely come fresh initiatives to encourage team spirit among children.

Admiring glances are something typically associated with everyday life and they come in many forms. From catching sight of a Michael Kors watch worn with pride by the new office intern to the latest wardrobe extravagantly displayed at a film premiere, being envious is an inescapable part of being human.

You would further be forgiven for desperately checking how much holiday allowance you have left. Traipsing the cobbled streets of Greater Manchester while on your way to and from work, on a grim winter evening these thoughts are never very far away.

Alas, Costa Del Cheadle doesn’t quite encapsulate feelings of sun kissed squares in the Mediterranean for the majority of us struggling to making ends meet.

Turning the clocks back to last May, England’s footballing youngsters beat Holland in the U-17 European football championship.

A rare, but tantalisingly rewarding final, it would be fair to say that on this occasion those glances were drawn to our young men.

Moving back to present time, when it comes to consistently bringing through exciting, home-grown talent that can play in major tournaments however, the jury is still very much out.

Is this really achievable though?

According to Neil Lucas, head of recruitment at Sala Soccer Schools, Oldham and Greater Manchester can be the starting point for keeping those eyes locked on football’s homeland.

Sala Soccer currently coach over 250 children a week in weekly classes, as well as working in seven primary schools and six nurseries, coaching futsal to 1100 school children in Oldham and Tameside.

“Two years ago I went to watch how Barcelona play from a young age,” Lucas told MM.

“They have incorporated a game known as futsal, which we teach at our schools. They decide when their players get older, when to stop playing futsal, and when to start playing football as we know it. However the FA will tell you differently.”

Now 43, Lucas has been coaching for over five years and has seen how South American flair, associated with the romance of academies such as Barcelona’s La Masia, has become the desirable blueprint for success.

“I use the techniques I saw as a tool to help children get better at football here in Oldham,” he added.

“We’re not building skyscrapers, we’re building bungalows, but we want to be a part of those fundamental foundations.

“You need to be taught life skills as much as how to pass a football.”

Then followed that piece of commentating gold: “They think it’s all over, it is now!” This is today viewed with incredulous irony, as, for many, England’s brief flirtation with global praise came and went with the spirit of 66’.

Not even Paul Gascoigne’s tears in Rome, some 24 years later at Italia 90’, could kick-start a reverse in fortune for a nation still in thrall at the seemingly unattainable prospect of success at a major tournament.

Now in 2015 the game changer for many is the argument that football is now too much of a business.

‘Buy now, pay next year’ deals weren’t just limited to furniture advertisements over Christmas, they’re an everyday part of the makeup of our clubs.

Growing resources are stretched to compete with the distorting effects of oligarchs and billionaires while costs spiral out of the realms of sanity.

No wonder, with an unquantifiable amount of money spent since that famous youth cup winning side of 1992 where Paul Scholes, David Beckham, Ryan Giggs and the Neville brothers, to name just five, burst onto the scene.