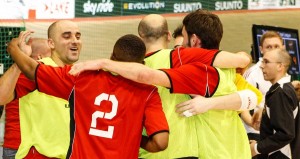 A new season begins for Sheffield FC Futsal this Sunday, heralding what promises to be an exciting time in the club’s history.

They take on Liverpool at EIS Sheffield (kick off 4.30pm) and the Northern champions will be aiming to go even better than the third place achieved in the national Grand Finals last term, while off-field work is underway on the club’s new home in Attercliffe.

Spanish head coach Daniel Berdejo-del-Fresno remains at the helm and has added some new faces to the squad and also welcomed back a familiar member of the team.

England international Ben Mortlock once skippered Sheffield to the national Grand Final in 2011 but missed the final against London’s Helvecia, where Sheffield were narrowly defeated.

Ironically, Mortlock then joined Helvecia but a move back north sees him re-united with a squad that still contains many of his old team-mates.

It’s an excellent coup to have Mortlock back as he was an influential figure in his last spell, and showed Sheffield just what they were missing last season when he scored two goals against them in a friendly for the England national team at St George’s Park.

Sheffield have also promoted four players from the development squad into the first team picture with Oliver Byrne, Joe Harris, Jay Ford and Mused Salem all looking to stake their claims for a place in the side’s line-up.

Sheffield were also given some fantastic news over the summer when they were awarded a grant from Sport England of £48,229 to develop a new base for Futsal at the Blue Shed in Attercliffe.

The venue, sponsored by structural engineering company Ekspan, is a multi-purpose facility that hosts a wide variety of conferences, exhibitions and events and has its roots firmly planted in performance arts.

However, with Futsal being a new string to the Blue Shed’s bow there will be moments of sporting theatre when the work is expected to be completed in the winter.

The plan is for the venue to not only host first-team Futsal matches but also be used as a base for developing the sport in the city and bringing through new talent as the game continues to grow in popularity.

This summer has also seen some departures from the squad. Bruno Nascimento lit up the league with his skill and goals but is returning to his native Portugal after finding a new job there.

Club stalwart and former England international Ollie Wheatley-O’Neill is also leaving British shores for New Zealand to continue his work as a doctor. Both players leave with the club’s very best wishes and thanks for their excellent efforts.

Sheffield’s minimum goal of the season is to retain their FA Futsal League North title and gain top seeding for a place in the national Super League.

Sunday’s game is free admission and will be played in the English Institute of Sport Sheffield’s badminton hall. Live updates will be posted on Sheffield FC Futsal’s twitter feed @SheffFCFutsal