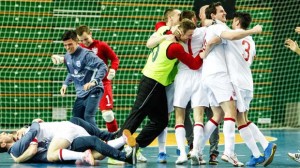 The Three Lions will face opposition from USA, Poland and Malaysia at the Sport Central venue at Northumbria University between 6 and 9 June.

And Sturgess has picked a 15-man squad for the games, including one new face in James Webb after coming through the development squad and impressing for the International Futsal Academy.

England kick-off against USA first on 6 June before they face Poland the following day. The fixtures are wrapped-up on Sunday 9 June when Malaysia are the opposition.

For full details of all fixtures and ticket details, click here.