More than a quarter of parents have revealed that fears of being judged by neighbours lead them to restrict their children from playing outside, a survey has found.

A third of parents also said that allowing their children to play ball games or make noise outdoors would lead to problems with other residents, reports the BBC. 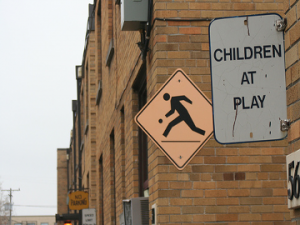 The survey was carried out by

One Poll to mark the launch of Playday – an annual campaign which is held every year in August – and surveyed 1,000 children between five and 16 years-old and 1,000 parents with children the same age.

Fifth-three per cent of parents thought traffic was a barrier to children playing out where they lived, 40 per cent cited “stranger danger” as a concern and 28 per cent said intolerant neighbours were a problem, although 60 per cent indicated that they would feel confident letting their children play in the street if others were playing out too.

The One Poll research suggests that play has the power to bring communities together, with 40 per cent of adults saying children playing out where they lived improved community spirit, and 45 per cent saying it helped families get to know each other.

“It’s up to all of us to turn around the creeping disappearance of children from our streets, parks and communities. We all have role – as families, neighbours, and friends,” said Cath Prisk, director of Play England.

“There always was and always will be some people who want to squash kids’ fun – but there are far more that really want kids back outside playing, not stuck indoors, especially over the summer holidays.”

Of the five to11-year-olds, 53% said they would like to play outside more, while 40% said they could do so as much as they liked.