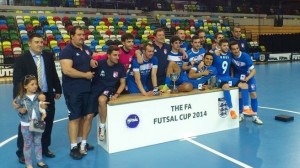 “It is good to play in this beautiful place,” said Baku United FC coach Chema Jiménez after completing the English double with an FA Futsal Cup win at London’s Copper Box

I would advice you to click here to read more to understand how even our local leagues fit in with the English FA – UEFA structure. Grimby’s team Valiant is North East of England Champions, had they continued and won FA Futsal Cup (as Baku have), they would have qualified for UEFA Cup!

How good are Baku? Three of us went to watch them play Sheffield and they was head and shoulders above opposition, best comparison I can give is Manchester City vs. Grimsby Town. That said we have young players coming through junior ranks that are outstanding and have the advantage of already played hours and hours of futsal.